So Faz and I returned home safely (albeit a couple kgs heavier) from Turkey last month, and I ABSOLUTELY LOVED IT THERE! Our 10-day trip was quite the adventure — I think I had way more fun in these 10 days than I’ve had in years put together!

I’d always wanted to visit Turkey for some reason. I wanted so much for Turkey to be THE honeymoon destination that even though we opted for Sri Lanka instead due to some circumstances, I regarded the latter as sort of a pre-honeymoon. I realised later what a silly concept that was because it didn’t quite work that way. One, because Sri Lanka was just as awesome. Two, the feeling you get going for a vacation as freshly minted husband and wife as compared to going 6 months later is just going to be different — period. So I suppose I’ll consider Turkey our second honeymoon!

Some of the trip’s highlights were staying in a cave hotel and riding in a hot air balloon in Cappadocia, paragliding and island-hopping in Oludeniz, and soaking up city life in Istanbul where the population is a whopping 14 million!

Because I don’t subscribe to “saving the best for last” when it comes to my holidays, Goreme in Cappadocia was made our first stop. And indeed it became my favourite part of the trip. It took us 4 airports to get there, but the gruelling journey was well worth it. It almost felt like I was on another planet because our time there was filled with nothing but unique experiences, which apart from staying in a cave and hot air ballooning included marvelling at the unusual volcanic rock formations (known as fairy chimneys) unique to Cappadocia, trekking into picturesque valleys and exploring an ancient underground city — things that don’t exist in the part of the world we come from.

The temperature during the day in Goreme was in the low 20’s deg C. I personally consider that to be cold, but with the sun out, it was quite alright — perfect for being out and about. It only felt cold when the wind blew, which was kind of a strange experience for someone who’s never been to a cold place before. Nights on the other hand, were freezing. Temperatures went below 10 deg C. Our cave room didn’t really make for a warm respite, but at least there was no wind in there and that’s probably already half the battle won.

The air was also especially dry throughout our stay in Goreme. The walls of my nose got so dry that part of it cracked and bled. Fortunately it was just a mild discomfort that didn’t get in the way of things.

We stayed at a cosy family-run cave hotel called Panoramic Cave Hotel. The owner said her parents used to live here. Two of the rooms were named after her brother and her because they were born in those rooms.

The room we picked was a real cave room carved out from a fairy chimney. That’s the door to our room on the left. 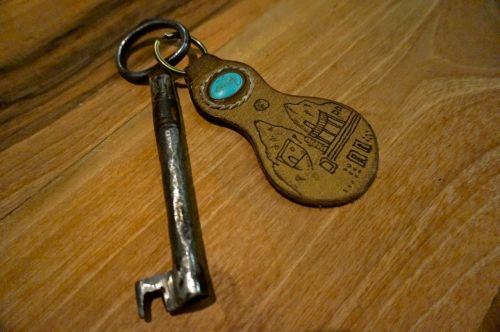 The medieval-looking room key that was as long as my palm.

After travelling almost 24 hours to get here, we were initially a little dismayed to discover how small our room actually was. But that was probably just the fatigue talking because after a while we came to appreciate this unique experience of staying in a cave.

It was only after we took this photo that we realised there was a winged figure carved into the wall that would look over us as we slept. Creeped us out a bit but once we discovered how comfy the bed was, we couldn’t give two hoots about the figure!

Felt quite like Alice in Wonderland walking through this fun-sized door.

In the morning we woke up to some noises (sounded like something being fired up) and looked out the window. Lo and behold, we had the famed Cappadocian sight of hundreds of hot air balloons rising up into the sky outside our window! I was practically hyperventilating as we jumped out of bed and out the room to get a better look. I think this had to be one of my best moments in Turkey. I’d seen this in pictures and longed so much to witness it for myself — and truly, nothing beats being there in person. Magical!

A panoramic view of Goreme from outside our room. 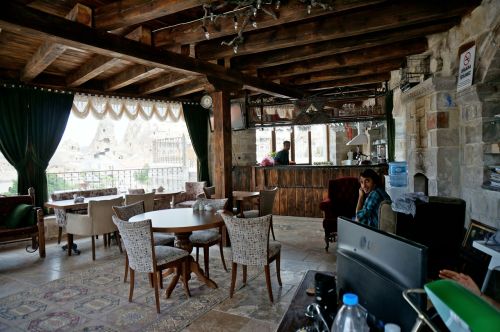 The way to our hotel from the town centre. I swear, Turkey is all slopes! We had quite the workout there. 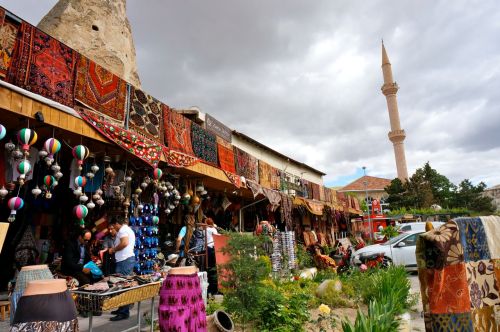 Shops like these selling souvenirs, carpets and handicrafts line the streets of Goreme town.

One of the days we signed ourselves up for a guided tour through our hotel. The tour operators there offer standard colour-coded tours (Green, Red and Blue), each covering a different set of major  attractions in Cappadocia. We took up the Green Tour, which took us to the Selime Monastery (above), Ihlara Valley, Derinkuyu Underground City, Pigeon Valley and Goreme Panorama. 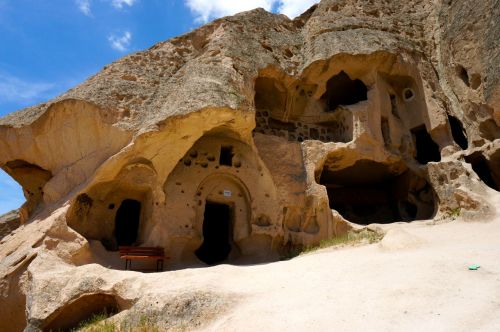 The rock-cut Selime Monastery, a Christian monastery dating back to the 8th century. You’d be surprised to know that there are many ancient churches in Turkey because the people practised Christianity in the periods before the Ottoman Empire.

It had all the rooms you’d find in a modern day monastery, except they were carved out of rock. Although it was bright and sunny outside, it was dark inside and felt a little creepy. I’d ventured on my own into one of those entrances but almost instantly turned back because I started to get the chills.

The interior of another room.

It had to be the work of Selime Monastery that made the muscles all over my body ache like hell the next day. These monks must’ve been a really fit bunch back in the day! 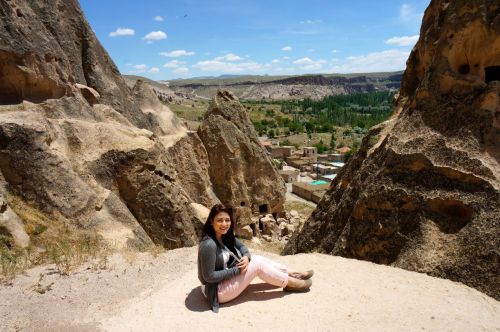 Contrary to popular belief, Turkey actually has quite a bit of greenery! 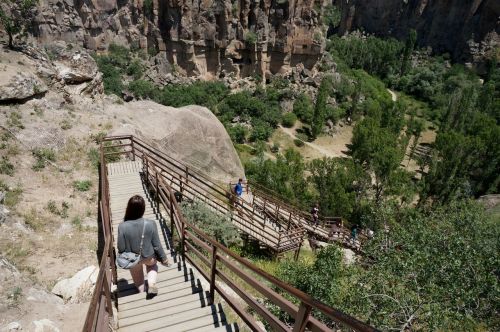 Next on the agenda was the Ihlara Valley, where we did a bit of trekking.

The Ihlara Valley, a canyon with a depth of about 100m, runs about 16km and was once home to 4,000 dwellings and about 100 churches with frescoes.

One church we stopped by to see was the Church of Daniel (a.k.a Church of Pantassa) of the 10th-12th centuries which had colourful frescoes depicting biblical stories.

Stopped to rest at a cute lil’ cafe with these tree stumps for tables and chairs. My cousin saw this photo and commented that it looked like a seating area for gnomes haha!

We later stopped for lunch at an interesting restaurant on a stream! 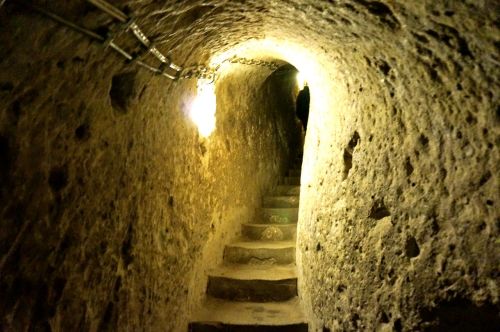 Next we visited the Derinkuyu Underground City, the deepest of 36 underground cities in Cappadocia. These underground cities basically serve as shelter against invasions. This particular one can house up to 20,000 and their livestock — can you imagine?! 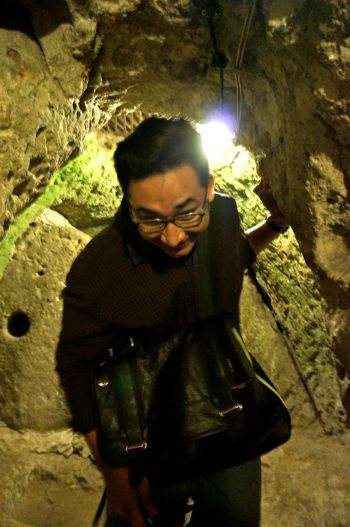 Poor 1.84m husband had to crouch through most of the tunnels.

It was quite an impressive complex. The people had everything they needed and life went on as usual down there. They could get water out of a well, kids went to school, men had meetings, women cooked, gave birth — everything.

Goreme in the evening. There were SO MANY cave hotels here it was a real challenge to pick one. But we’re happy to have picked Panoramic Cave Hotel because it was value for money and within our budget. 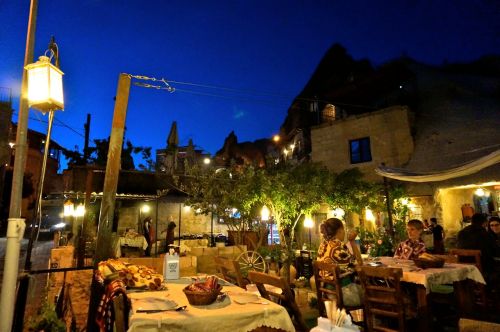 At the recommendation of our hotel owners, we tried out a open rooftop restaurant nearby the hotel called Koy Evi. Everyone had these cute printed blankets on that were provided by the restaurant because it was about 11 deg C out. Loved the ambience!

Nothing better than having a hot beverage (a tasty Turkish apple tea, no less) in the cold weather!

Faz having a lamb pottery kebab which came in a clay pot that the waiter had to break open. I don’t think these used pots can be re-used, so can you imagine how many of these go to waste everyday? I did see some shops using them decoration, though. 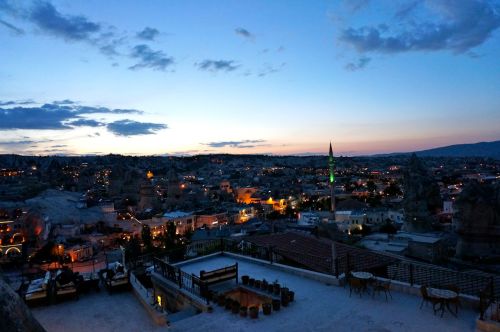 Goreme by night. What a sight!

HOT AIR BALLOONING THE NEXT MORNING! 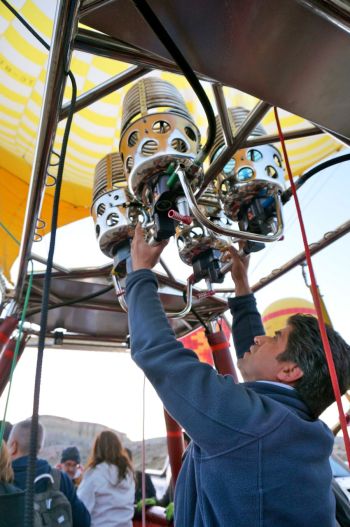 Our pilot firing up our hot air balloon.

Everywhere you turned was a photo op!

I don’t usually take selfies, but vacations are an exception!

The lovely people in our half of the basket. One basket could accommodate 24 people.

Nothing but gorgeous views during the hour-long ride.

One of my favourite shots of us!

Faz with our humorous pilot, who made our journey that much more enjoyable. We flew with Turkiye Balloons by the way, which we totally recommend!

Balloons getting deflated in the distance. 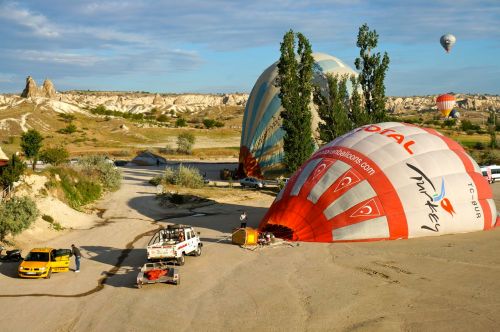 Boo, our ride was coming to an end! 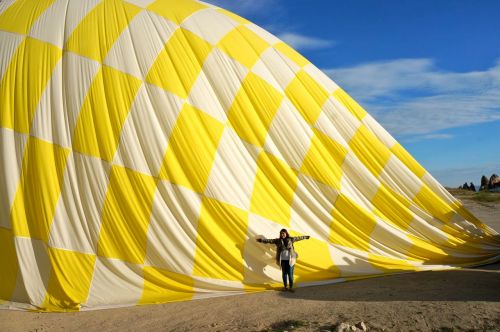 As you can see, the balloons were HUGE!

Faz lending his body weight to compress the balloon into that bag — and doing a pretty good job haha!

And so that concludes our out-of-this-world experience in Cappadocia!

Next I’ll be writing about our time in Oludeniz! :)