The biggest purchase of our lives, ever.

We’ve been counting down to the 17th of August for two unbearable months, and I cannot tell you how excited we are…

…to have selected our unit in Costa Ris!

Nevermind that we were the 515th in queue and that most of the blocks nearer to the train station had been snapped up. All was still good — we checked out the site once and in truth, even the block farthest from the train station wasn’t that far at all.

So over the past few days we’ve been shortlisting our preferred units. Our unit should preferably be:

I’m quite curious how other people go about choosing their units. Do most people go through a thorough analytical elimination process following a ton of research, or do they just follow their intuition?

For us, I’d say we did a fair bit of research but in the end we just followed the voice inside our heads.  We chanced upon a property blogger’s website, where he did an analysis of Costa Ris, and came up with unit recommendations based on factors like whether the unit would be facing the sun and which units have, to a certain extent, “unblocked” views. In the end, we only took some of his points into consideration, choosing the unit we felt most comfortable with based on our likes and dislikes.

I suppose there’s no way of knowing if you’ve made the right choice of unit until you’re actually staying in it. Come to think of it, it’s actually quite ridiculous to be buying possibly the most expensive thing you’ll ever buy in your damned Singaporean life without even seeing it. Feeling it. Experiencing it. If you want those options, well, you’ll just have to be prepared to pay more. But that’s just how it is.

Even after we paid the 2k option fee, I started to ask myself the ‘what if’s. What if there were other factors we failed to consider? What if it turned out to be a horrible choice? What if this? What if that? But as usual, my mother never fails to put all these worries to rest, saying “everything that happens, happens for a reason“. Every single decision we make in our life is predestined, all part of God’s plan.

We’re really, really excited. We’ve been together for almost 8 years now, and we’ve been so carefree and having such a good time that we’ve never felt the stretch. But now that we’ve set something in sight and knowing it’ll take us 2 years to get there….well, it’s starting to feel a bit long.

I’ll let the pictures do the talking for now. 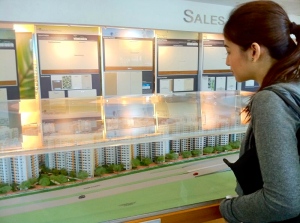 Excitedly snapping photos of the 3D models to remind ourselves we have this reward to look forward to after having to be excruciatingly frugal these couple of years.

One of these flats here is ours! 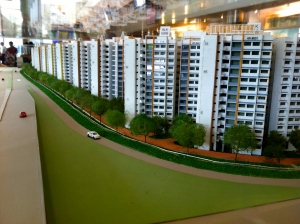 View of the long stretch road just after the TPE Avenue 5 exit.

View of the other end of Costa Ris.

Doors to possibly the most expensive purchase in our lives ever.

These were the tiles provided by HDB for the living room, kitchen and bathroom. As clearly represented here, they’re nothing much to rave about. 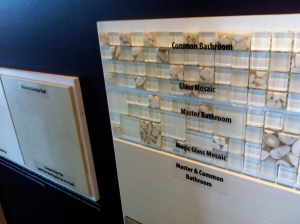 A close-up of the bathroom tiles.

We saw the doors HDB provided as well. All very…meh. Having said that, we didn’t opt-in the Optional Component Scheme (OCS). It may have been cheaper, I suppose, but I want a house I’ll LOVE coming home to. The boyfriend is already worried the renovation is gonna cost us a bomb.

4 Comments on “The biggest purchase of our lives, ever.”